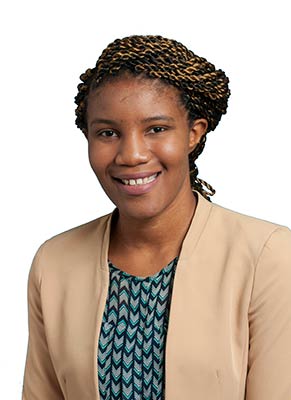 Lanasia is a member of our commercial department where she has been honing her skills in commercial and corporate law. She completed her in-service training with the firm in 2015 and joined it the following year having been admitted to the bar in both Barbados and Jamaica.

A native of Jamaica, Lanasia earned her LL.B with first class honours from the University of the West Indies, Mona, in 2014. She later obtained her Legal Education Certificate from the Norman Manley Law School in 2016.

While pursuing her studies at the Norman Manley Law School, Lanasia was a tutor of criminal law and equitable remedies at the Faculty of Law, Mona Campus. She also participated in the Price Media Law Moot Court in Oxford, an international mooting competition.

In her final year of study, Lanasia also delivered a research paper on the extent to which Jamaica’s Sexual Offences Act afforded protection to vulnerable groups, particularly, women and children. This led to her being selected to guide consultations with and prepare submissions on behalf of several women’s civic society groups proposing amendments to the Act.