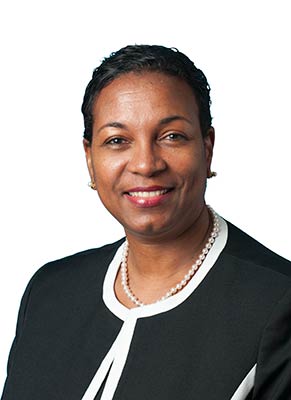 Rosalind graduated from the University of the West Indies, Cave Hill, Barbados, in 1985 with her LL.B (Hons.) degree and received her Legal Education Certificate from the Hugh Wooding Law School in Trinidad & Tobago in 1987. She was admitted to the Bar in Barbados in 1987, and later was admitted to the Inner Bar as Queen’s Counsel in 2018.

Her real property practice serves property developers, individual and corporate clients in the sale and purchase of real property, as well as lenders in the residential and commercial loans arena.

Rosalind is a delegate to the International Trademark Association and the Intellectual Property Caribbean Association. She has served for many years on the Advisory Committee on Intellectual Property (which advises the Barbados Government on IP issues), chairing the committee from 2004 to 2008, and remains a member of the committee. Rosalind holds an LL.M in intellectual property law awarded in 2008 by the University of Turin in conjunction with the World Intellectual Property Organization Worldwide Academy. She received the Microsoft Award for best research paper, and still often writes for international publications in the area of intellectual property, and on a variety of topics in the firm’s quarterly newsletter.

Outside of the firm, Rosalind is the deputy chairman of the Community Legal Services Commission, a statutory board which administers the provision of government-funded legal aid in Barbados. Over the span of her career, she has also served the Barbados Bar Association in several key roles, and is currently the President of the Association (July 2019 to date).